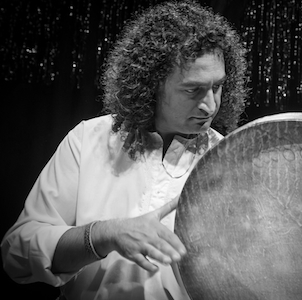 Born 1977 in Iran, Reza Samani  began his international professional career in 1999. He  has been performing with some of the most highly acclaimed musicians like Rahmatollah Badii, Hossein Alizadeh, Konstantin Wecker and Charlie Mariano. He has toured in North America and Europe with ZARBANG and Ensemble Samani and has appeared as a guest musician in numerous festivals such as the Veranos de la villa in Madrid, Orientale Tanzhaus NRW, Ruhr Triennial  Silkroad Festival in Hong Kong and Sounds of Arabia in Abu Dhabi. Also he performed with the Symphony Orchestra of the Norwegian Radio and Television and on SWR and WDR stations.
Reza teaches Tombak, Daf, Udu, and frame drum in workshops across Germany and throughout Europe.